It may be hard to pinpoint specific signs of bulimia. Bulimia is a serious eating disorder characterized by binge eating following by vomiting. If not managed properly, it may affect the physical and psychological health of the patient.

Here is a brief discussion about what bulimia nervosa means and the common signs and symptoms it causes.

What is Bulimia Nervosa?

Bulimia nervosa, commonly referred to as bulimia, is a potentially life-threatening disorder related to the eating habits of a person.

A sign of bulimia is when one binge eats secretly, meaning they may eat a large amount of food due to the loss of control over cravings or appetite. This is followed by purging in an attempt to get rid of the excess calories to prevent weight gain. This is considered an unhealthy and dangerous way to restrict your calorie intake.

Patients with bulimia may use other unhealthy methods to lose weight. For example, some patients may self-induce vomiting regularly or misuse laxatives. The use of weight-loss supplements, enemas, and diuretics are also some ways patients try to lose weight.

It is important to be aware of the warning signs of bulimia to avoid harmful consequences.

What are the Common Signs of Bulimia Nervosa?

Patients with bulimia are often preoccupied with their body weight and shape. They tend to judge themselves harshly and severely for their self-perceived flaws. They also have a low self-esteem due to the issues related to self-image.

The common signs and symptoms of bulimia include:

These symptoms of bulimia indicate an unhealthy pattern of eating. These traits may be adopted by patients to overcome peer pressure or issues related to the body shape. They are often ashamed about their weight gain and fear being laughed at if seen eating. 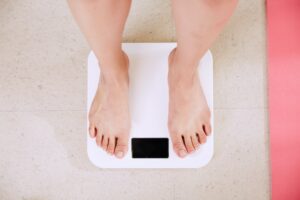 They may also develop very low self-esteem which increases the risk of other mental health issues, such as depression.

If not managed properly, the unhealthy eating pattern may lead to the deficiency of nutrients in the body. It may affect the process of digestion as well as the functions of other vital organs including the heart and kidneys.

Women may develop menstrual irregularities. Alcoholism and drug abuse are also common in patients with bulimia.

Early diagnosis and effective treatment of bulimia could help to avoid the adverse impact of unhealthy eating patterns. If you or a loved one exhibits these or other signs of bulimia, it’s important to set up an appointment with a psychiatrist early on.